It is fitting that the Consumer Product Safety Commission (CPSC) has recently released solid, informative policies advising agency staff, including scientists, on the appropriate use of social media to both do the work of the agency and as citizens with their own opinions. 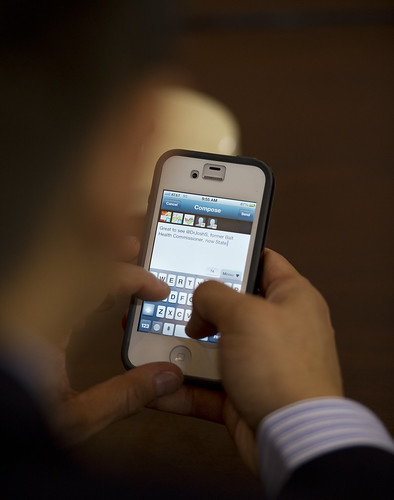 The CPSC’s recent release of social media policies are a step in the right direction for agency scientists. Photo: Flickr User MDGovpics

Fitting because this social media policy initiative is being launched just as the Commission marks an important anniversary. On August 14, 2008, in one of the happiest days of my life as a public interest advocate, the Consumer Product Safety Improvement Act (CPSIA) was signed into law.

The Union of Concerned Scientists, and our members, were deeply engaged in the struggle to get this new law enacted. The Consumer Product Safety Commission had been pretty much a basket case before the new law was passed. It lacked the resources to ensure that consumer products were safe, and the year before scores of recalls, particularly of children’s products, had brought that weakness home to millions of Americans. The CPSC scientists and statisticians we met with were demoralized, often subject to political interference in their work, and hindered from doing studies crucial to providing important safety information to the public.

The new law gave the agency more authority and resources to do its work. It required that certain children’s products be tested for safety before they are sold. It reduced the amount of lead permitted in children’s products, guided by the best available science on the hazard of lead to this age group. And the law established a publicly accessible database where consumers could post information about a potentially harmful product.

CPSC Chair Inez Tenenbaum has guided the agency into this CPSIA transition. She’s helped change the culture of the agency, promoting more openness at the agency, and creating a safer space for Commission scientists to discuss the mission of their agency. Early in her tenure, Tenenbaum also made sure that the agency was in the social media sphere, taking its information about product safety to a large public audience.

Recently, the agency released its policies that clarify how staffers, including scientists, may express their views on their own blogs and websites. Our Center for Science and Democracy has been pushing federal agencies to pay attention to social media policies, to ensure that agency scientists have certainty about exercising their free-speech rights. We even developed a model policy, to assist agencies in this effort.

Chairman Inez Tenenbaum comments on the value of openness and transparency at a Branscomb forum last Fall. Photo: UCS

CPSC’s agency media policies follow many of our recommendations. High on our list of best practices is acknowledging the right of scientists to express their own views on their own Facebook pages or personal blogs. The CPSC policies stipulate that agency staffers are permitted to identify their employer on their personal  social media sites while expressing their own views, provided they state that they aren’t speaking on behalf of the agency. The agency’s policies also make clear that agency staff won’t be able to disclose any confidential information about agency investigations or rule-makings.

Also noteworthy is the creative way the CPSC is communicating this policy to its employees, through a Frequently Asked Questions section. This is helpful because the agency can actually discuss what the policies mean by giving real-world examples.

If we were asked for our suggestions to improve these policies, we would offer a few ideas. The Commission’s policy does not include the very good supportive comments on the value of openness and transparency, that we’ve heard CPCS Chair Tenenbaum state in public forums.  So we suggest the policies incorporate some of that positive rhetoric!

Ideally we’d also like to see all agencies—including CPSC—follow the lead of the US Geological Service. USGS, after meeting with us, explicitly gave technical experts the right to a correction of any mistakes in information based on their work that was posted on a social media site.