North Korea launched a series of missile tests in recent weeks. Here’s a summary of the North’s various missile systems and my understanding of where they stand, based in part on computer modeling of their capabilities.

North Korea has been buying, building, and developing missiles since the 1980s, beginning with short-range Scud missiles, which were originally developed by the Soviet Union in the 1960s. In recent years, it has launched two satellites into orbit, although it’s not clear whether either satellite worked as intended once they got there.

And it has conducted five underground nuclear tests, with varying degrees of success. It is assumed to be trying to develop a nuclear warhead that could be carried on a missile. The mass of the warhead affects how far a missile can carry it; estimates for the mass of a nuclear warhead it might be able to mate to a missile vary from 500 to 1,000 kilograms (kg). Several variants of this missile exist with ranges of 300 to 500 kilometers (km) when carrying a 700 to 1000 kg warhead. That range would allow them to reach most of South Korea (see Fig. 1). As noted above, we don’t know the size and mass of a North Korean nuclear weapon, but it may be small enough to be carried by such a missile. Scuds are based on 1960s-era technology. They use liquid propellants and can be transported and launched from large trucks. They are believed to have an accuracy of 0.5 to 1 km, which is too inaccurate to effectively attack military targets but could be used against a large target like a city.

These missiles are believed to be able to carry a 700 to 1000 kg warhead to a range of 1,000 to 1,300 km, which would allow them to reach most of Japan (see Fig. 1). They use Scud-level rocket technology, and have an accuracy of several kilometers, again limiting their use to large targets like cities. They can be transported and launched from large trucks, but are large enough that they must be transported without fuel. They are fueled with liquid propellants in the field once they have reached their launch position—a process that may take an hour or two, during which time they would be susceptible to attack. The test record of the Nodong appears to be pretty good, although in a recent launch the missile reportedly exploded shortly after launch.

This missile is believed to use more advanced missile engines and fuel than is used in the Scud and Nodong. North Korea has displayed this missile in parades for several years, but the first test launch took place only earlier this year. It has been launched six times in recent months, all but one of which failed. The one successful test, on June 21, flew on a highly lofted trajectory presumably to keep from overflying Japan. This trajectory indicates this same missile could reach a maximum range of about 3,000 km. This range is too short to target Guam, which is presumably the goal of such a missile (see Fig. 2).

While there are reports that North Korea has put some Musudan missiles in the field, they can’t be considered operational given the test record. North Korea seems unlikely to fire one of its few nuclear warheads on a missile with such a poor test record. Like the Nodong, the missile is carried on a mobile launcher and would be filled with liquid fuel in the field prior to launching. Its accuracy is likely several kilometers.

Taepo-Dong 2 missile:  not tested, not operational

Taepo-Dong -2 is the name given to a missile based on the technology used in the Unha-3 space launcher that put North Korean satellites into orbit in December 2012 and February 2016. An analysis based on the 2012 launch, including rocket parts recovered by South Korea after the launch, shows that the first two large stages of the rocket use Scud-level technology. If the Unha were modified to carry a 700 to 1,000 kg warhead rather than a light satellite, the missile could have enough range to reach Alaska and possibly Hawaii, but might not be able to reach the continental US (Fig. 2).

A ballistic missile version of the Unha has not been tested. Because of its large size it is unlikely to be mobile, and instead would be assembled and launched from a large pad, as in the Unha launches. Its accuracy would likely be many kilometers.

Like the Musudan, mockups of this missile have been seen in parades for several years, but there have been no flight tests of the KN-08. If it represents a real missile in development, it is likely to use liquid fuel and technology used in the Unha and Musudan missiles, with the goal of achieving long ranges with a missile small enough to be carried on a mobile launcher. Depending on the technology, one analysis estimates that it could have “a range of 7,500-9,000 km, enabling it to reach the West Coast of the United States carrying a warhead package of 500-700 kg” and with likely accuracy “barely adequate to target large cities.”

As with the Nodong and Musudan missiles, it would be “moveable” rather than truly “mobile,” since it would be transported without fuel and would be fueled at the launch site, which would likely require an hour or two. Since there have been no flight tests, it’s not possible to suggest a timeline for this missile.

This missile is in early stages of development. Early tests in 2014-5 attempted launches from an underwater platform, but more recent tests appear to have ejected the missile from a submarine launch tube. After initial failures using a liquid-fueled missile, the most recent tests have instead used a new two-stage solid-fueled missile.

The August 24, 2016 test is the first time the missile appeared to operate roughly as planned. As with the Musudan test discussed above, the missile flew on a highly lofted trajectory, presumably to keep from reaching Japan. This test indicates this same missile could reach a maximum range of about 1,300 km if flown on a typical trajectory. This range is similar to the Nodong missile, and would allow it to reach Japan from a submarine located near the Korean coast. While theoretically the missile could reach more distant targets if the submarine moved farther from the coast, the submarines are relatively noisy and would likely be attacked if they traveled away from the coast.

It will take a number of additional tests before the missile could be considered operational. Like the Nodong, the accuracy is likely to be several kilometers. If this missile were adapted as a mobile solid-fuel land-based missile, it would have the advantage that it would not require the fueling preparation time that the liquid-fuel Nodong does. 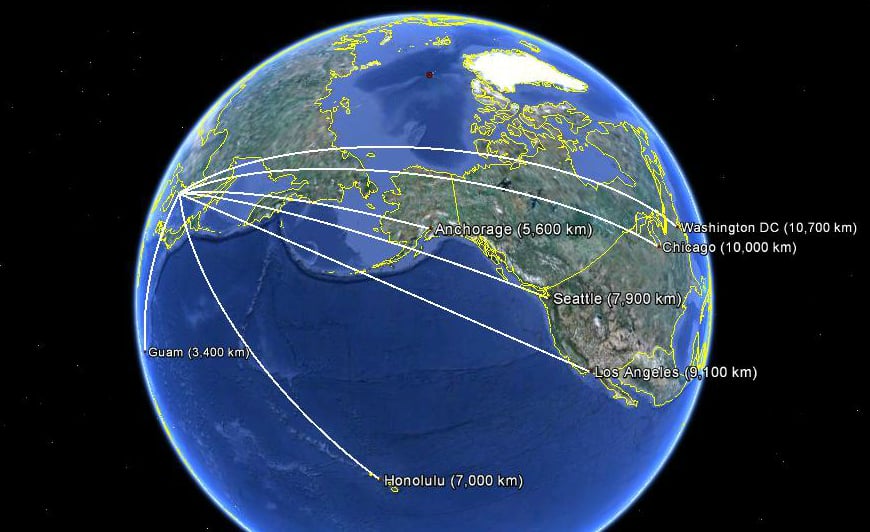 This is an update of an earlier post that appeared on AllThingsNuclear.