Disaster by Design/Safety by Intent #26

We often talk and write about equipment failures and/or worker mistakes that increased the chances of reactor core damage. And much is reported about damaged reactor cores, such as during the five years since three reactor cores at the Fukushima Daiichi nuclear plant in Japan became damaged. This commentary explains how a reactor core overheats and melts down. 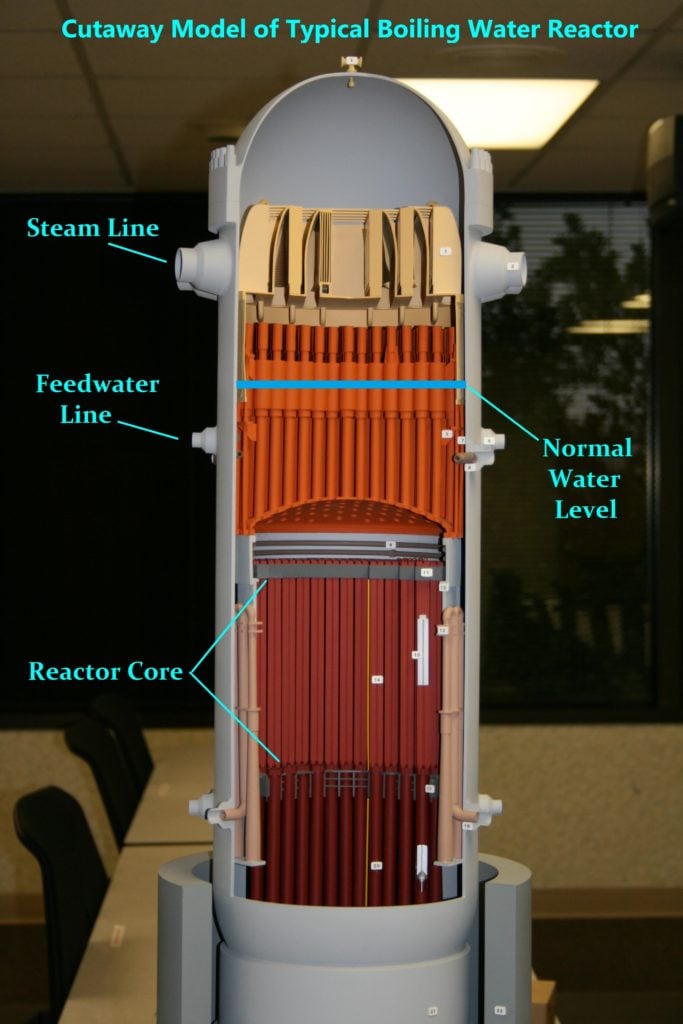 Meltdowns are the best known way for reactor cores to become damaged. Next week’s post will describe a lesser known way to damage a reactor core.

A reactor produces heat from the fissioning, or splitting, of uranium and plutonium atoms when it is running. The reactor core continues to generate heat after it is shut down. Many of the smaller atoms created by fissioning atoms are unstable. Unstable fission byproducts seek stability by emitting radiation in the form of neutrons, alpha particles, beta particles, and gamma rays. Thermal energy, called decay heat, is produced by these radioactive emissions. Decay heat continues to be generated after the reactor shuts down. Water is continually needed to cool the reactor core long after it is shut down. Initially, the exposed top portion of the reactor core continues to be adequately cooled by the steam flowing upward past it. The steam has the ability to absorb some heat—doing so removes the decay heat emitted from the exposed reactor core region.

As the water level continues dropping, the amount of decay heat emitted from the exposed reactor core region exceeds the amount of heat that can be absorbed by the steam. The heat that cannot be carried away by the steam warms the exposed region of the reactor core—the fuel pellets along with the metal rods containing them. The fuel rods in U.S. reactors are made from zirconium metal. As the fuel rods heat up to 1,500 to 1,800°F (compared to less than 700°F when the reactor is operating at full power), a chemical reaction between the metal rods and the steam adds more heat to hasten the progress towards meltdown. The reaction also produces large amounts of hydrogen gas. As temperature increases past the melting point for the metal fuel rods and for other components inside the reactor core (such as control rods), these materials become molten and fall towards the bottom of the reactor vessel. Noble gases and high volatile fission byproducts such as iodine, krypton, xenon and cesium get released into the reactor vessel as the extent of core damage increases.

The uranium dioxide fuel pellets are in a ceramic form also melts at high temperatures. The melting of the fuel pellets releases low volatile fission byproducts like strontium. The molten core region will fall, or slump, towards the bottom of the reactor vessel. A reactor core meltdown destroys two of the barriers between radioactive material and the environment: the fuel pellets and the fuel rods. Consequently, a vast amount of radioactive material gets released into the reactor vessel. The molten core debris can breach the reactor vessel, as almost happened at Three Mile Island, eliminating another barrier. The large amount of hydrogen gas produced by the overheated reactor core en route to meltdown can explode, challenging or even breaching the containment structure, the final barrier.

It took longer than a decade to clean up the reactor core meltdown at Three Mile Island (Fig. 5). Workers were no longer discharging fuel assemblies from the reactor vessel—they were dealing with a debris field. They lacked procedures, equipment, and experience cleaning up after a meltdown. They had to develop the tools and techniques for doing the job. It has been five years since three reactor cores melted down at Fukushima and workers have not yet ascertained the final location and condition of the cores, let alone begun removing the debris fields. Nearly 300,000 pounds of core debris were removed from Three Mile Island and shipped to Idaho for long term storage. A stitch in time may save nine, but the value of better management and oversight that could have avoided turning a reactor core into 300,000 of highly radioactive debris is calculable. The cost of cleaning up the core meltdown at Three Mile Island exceeded $1,000,000,000.

Postscript: This description of a reactor core meltdown progression was based largely on a report titled “Molten Material Relocation into the Lower Plenum: A Status Report,” issued in September 1998 by the Nuclear Energy Agency in France.