Tonight, President Trump is expected to sign the National Defense Authorization Act (NDAA)  at Joint Base Andrews, a defense budget bill totaling a stunning $738 billion. Much attention has been given to the many ways that Democrats lost out on progressive priorities in this bill. The nuclear arms control and disarmament community lost hard-fought battles over issues like the low-yield warhead, and overall spending levels on nuclear weapons systems.

UCS’s President Ken Kimmel put out an important statement on these issues, urging members of Congress to vote “no” on this dangerous bill. But many nuclear weapons-related issues have been flying under the radar, especially those relating to the communities directly impacted by nuclear weapons production and testing. Here’s a run-down of the issues nuclear policy wonks might have missed in their analysis of the NDAA.

Study on Runit Dome in the Marshall Islands 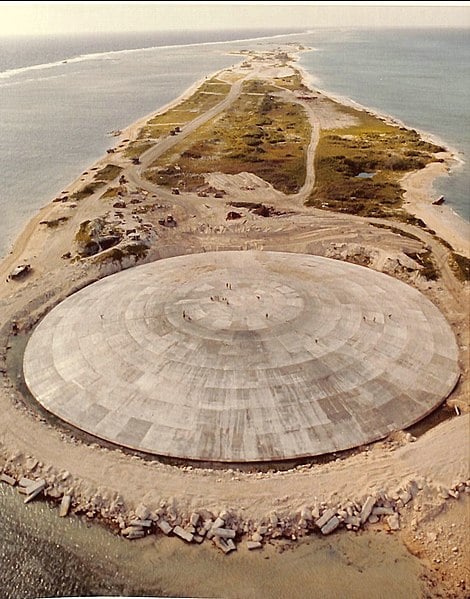 The House version of the NDAA included a call for the Secretary of Energy to produce a comprehensive report on the health and environmental impacts of Runit Dome in the Marshall Islands: a massive unlined pit on Runit Island that holds waste and debris from 67 US nuclear tests on the islands, covered by a cracking, leaking concrete dome. The LA Times offers an excellent analysis of this issue.

The required elements of the report largely made it through the conference process intact, but the Senate removed some of the more sweeping provisions. These include a study of the physical health impacts on Pacific Islanders resulting from US nuclear testing activities in the Marshall Islands, and a call for a plan to remove the radioactive contaminants from the dome and relocate them to a more stable location.

For the Marshallese, who for decades have been fighting for proper recognition of the harms to their country and population, as well as adequate compensation, clean-up, and health care access, the call for a comprehensive study as outlined in the original House version would have been a step in the right direction. But the Republic of the Marshall Islands National Nuclear Commission stated: “given the Senate-amended version of the bill, it’s difficult to see how the report would produce any new and useful information beyond what has already been done by the DOE, which has fallen short of satisfying Marshallese concerns.”

In addition to working to prevent radiation leaks from the dome, the Marshallese are also fighting for, among other things, adequate studies and clean-up of other islands, proper compensation for health and environmental consequences and tests, and improved access to health care. So the dome itself is really just the tip of the radioactive iceberg. Much more work needs to be done by the US government to address their assault on the Marshallese people with these nuclear tests.

Medal of Recognition to Atomic Veterans

Atomic Veterans are the soldiers that were present at the US’s nearly 200 atmospheric tests in the Marshall Islands and Nevada, as well as those that had to clean up the waste left behind from tests. The House version of the NDAA included a provision to create a Medal of Recognition to Atomic Veterans. The provision was taken out in conference and did not make it through to the final bill. This is a terrible shame and, in my opinion, a great sign of disrespect to the thousands of surviving atomic veterans.

In response to this decision, Keith Kiefer, National Commander of the National Association of Atomic Veterans, stated:

The most current Atomic Veteran count from the Defense Threat Reduction Agency (DTRA) sits at 550,000 individuals. Until 1996 these individuals were under an oath of secrecy, not being able to talk with their doctor or family members without risking imprisonment and/or civil fines. These individuals were left to suffer in silence. The Atomic Veteran was used in various roles of support, study of the physical, psychological and readiness effect(s) when using nuclear weapons. None of these men were given informed consent while participating in these activities.

If nuclear weapons were like conventional weapons, many of these veterans would have had evidence of physical injury and be eligible for a purple heart medal. Moreover, were it not for the oath of secrecy these veterans would have received service medals while still in the service. Most of these veterans’ longevity and quality of life have been shortened. Creation of and issuing an Atomic Veteran Service Medal would correct the injustice of not recognizing the sacrifice and contributions these veterans have made on behalf of the country. Of equal importance to the families whose veteran is no longer with us, is the recognition that their loved one’s sacrifice and contributions were not in vain.

Congress established the Radiation Exposure Compensation Act (RECA) in 1990 and expanded it in 2000 to provide compensation to people harmed by nuclear atmospheric testing (“Downwinders” and Atomic Veterans) and uranium workers (miners, millers, core drillers, ore transporters, and remediation workers). Though an important program overall, RECA is severely flawed, largely because many communities directly impacted by testing and uranium mining are left out of the program and therefore ineligible for compensation. These include many regions affected by testing, the veterans who cleaned up atomic waste after tests, and uranium industry employees who worked in facilities after 1971. Legislation has been introduced to address this (H.R. 3783 and S. 947), which many activists in these communities are working hard to support.

The NDAA sought to begin addressing these concerns in two ways:

Currently RECA is set to expire in 2022. H.R. 3783 and S. 947 would extend RECA until 2045; that additional time is sorely needed. Tina Cordova shares: “Imagine – the Downwinders of New Mexico have been denied access to RECA and the much needed health care coverage for 29 years and now we are facing a sunset provision.  Bills have been introduced for 9 years to amend RECA to include the New Mexico Downwinders and yet not a single hearing in the House.”  Nuclear policy groups should pay attention to this upcoming deadline and support the communities advocating for these bills.

This NDAA authorized roughly $5.5 billion for “Defense Environmental Cleanup” of nuclear weapons waste sites like Hanford, Los Alamos and Oak Ridge Reservation. This is a roughly $100 million reduction from FY19 NDAA authorization levels. Clean-up budgets should be increasing, not decreasing, because the longer it takes to clean-up these sites, the longer workers and nearby residents are being exposed to dangerous nuclear and hazardous material. The good news is that the Energy + Water Appropriations bills allocate $6.255 billion for Defense Environmental cleanup, well above FY2019 levels.

What’s also notable here is that the $5.5 billion for clean-up represents nearly a quarter of the NDAA’s whole discretionary budget for “Atomic Energy Defense Activities,” including all of weapons activities and non-proliferation. As the United States continues to increase spending on nuclear weapons, it should not forget that cleaning up the waste from the long history of producing weapons remains an extremely costly problem with no reasonable solution in sight, while communities and the environment continue to be poisoned by radioactive, toxic and hazardous pollutants.

Don Hancock notes that “the NDAA does include new Senate language to require submission to Congress with the annual Budget Request a report on the costs of meeting legal agreement milestones at sites. The Request never includes sufficient funding, but activists have long advocated for DOE to have to admit to the significant shortfalls in the request.”

Congress established the Defense Nuclear Facilities Safety Board (DNFSB) in 1988 to provide independent oversight for Department of Energy nuclear facilities to ensure their safety, as well as the safety of the public and workers.  Watchdog and grassroots activist groups near nuclear sites have been fighting for over a year to ensure that the DNFSB retains its oversight capabilities. In 2018, the Department of Energy issued Order 140.1, which has the potential to “severely constrain the Safety Board’s access to information, facilities, documents and personnel.”

Activists were glad to see a House provision largely remain in the final bill, which ensures the DNFSB has the full access they need. This is an important win for workers and nearby residents, allowing the Board to carry out its responsibilities to monitor nuclear sites and ensure public safety.

The nuclear policy community is also concerned about the requirement for the NNSA to produce 80 new plutonium pits per year starting in 2030, a significant increase over the current production capacity at Los Alamos National Laboratory (LANL) in New Mexico. The new production would take place at expanded LANL facilities and at the Savannah River Site in South Carolina.  In addition to posing an arms control problem by supporting the production of new warheads in addition to refurbishing existing ones, these programs pose potential risks to the workers and nearby communities.

LANL’s pit production program has been shut down many times, most recently from 2013 to 2016, over chronic safety concerns. Even after re-opening, an April 2019 report from the DOE and a November 2019 letter from the DNFSB highlight continuing major safety concerns.

Savannah River Site poses novel risks, as the site has never before produced pits, and is now being required to do so on a very expedited schedule, requiring the repurposing of the partially constructed Mixed Oxide Fuel Fabrication Facility, at which there were many construction problems. The combination of these issues (not even taking into account clean-up currently taking place at SRS) is a recipe for mistakes and accidents that could put people in harm’s way. A recent Institute for Defense Analyses report states that the current plan to produce 80 pits per year in the given timeline is extremely challenging, if not impossible, and poses many risks. In fact, they state “No available option can be expected to provide 80 ppy [pits per year] by 2030.” The DOE has not indicated how it will address this.

This piece was reviewed and in some cases contributed to by the advocates and experts listed under each section. My sincere thanks to each of them for their help with this piece.

Editors Note: January 27, 2020 was the “National Day of Remembrance for Downwinders”—a day to acknowledge the extreme harm caused to those exposed to radiation and fallout from atmospheric nuclear weapons tests conducted in the United States. UCS stands with these communities in their fight for compensation, through the Radiation Exposure Compensation Act (RECA), for the health consequences and deaths resulting from this testing. Join us in calling on members of Congress to support legislation to expand and extend RECA, which is currently set to expire in 2022. Recent developments and current legislation on RECA appear in the blog above.