The idea of space-based missile defense system has been around for more than 30 years. There are at least two reasons for its continuing appeal.

The first is that it is seen as a global system that could defend against missile launches from anywhere in the world.

The second is the attraction of intercepting long-range ballistic missiles during their “boost phase”—the few minutes when their engines are burning. Hitting a missile while it is burning sidesteps the difficulty of evading decoys and other countermeasures that missiles can release during midcourse phase after their engines shut off. Defenses that are intended to intercept during midcourse phase, like the US Ground-based Midcourse Defense and Aegis systems, are highly susceptible to countermeasures.

But for an interceptor to be able to reach a missile during the short boost phase, it must be stationed close to where the missile is launched—which is the motivation for putting interceptors in orbit so they can pass over the launch site.

However, the reality of space-based defenses is not so appealing.

Technical studies (for example, by the American Physical Society (APS) (2004) and National Academies of Science and Engineering (2012)) show that even a system with many hundreds of space-based interceptors would not provide an effective defense—in part because the interceptor constellation would be vulnerable to anti-satellite weapons and to being overwhelmed by a salvo of missile launches.

Yet it would be extremely expensive. The National Academy study concluded that a space-based boost-phase missile defense would cost 10 times more than any terrestrial alternative. It said that even an “austere and limited-capability” system would cost at least $300 billion.

These problems are intrinsic to the system because of the physics of operating in space. A few diagrams can make clear why—see below.

The technology does not exist for space-based lasers powerful enough for missile defense, so the defense systems being discussed would use kinetic interceptors that would accelerate out of orbit and physically collide with a missile. Since a missile’s boost phase lasts only a few minutes, in order to reach the missile the interceptors need to be in low-altitude orbits (typically 300 to 500 km (200 to 300 miles)) that pass over the launch site.

Fig. 1. An orbit lies in a plane that passes through the center of the Earth. The angle between that plane and the plane that contains the equator is called the “inclination” of the orbit. The “ground track” of an orbit is the line of points on the Earth directly below the satellite. (Source)

The fact that the interceptors are in low-altitude orbits has three important implications:

That means the system needs many interceptors in orbit so that one moves into position as the one in front of it moves out of position. As I show below, 300 to 400 interceptors are needed in orbit just to cover North Korea, and 1,000 or more for global defense coverage. 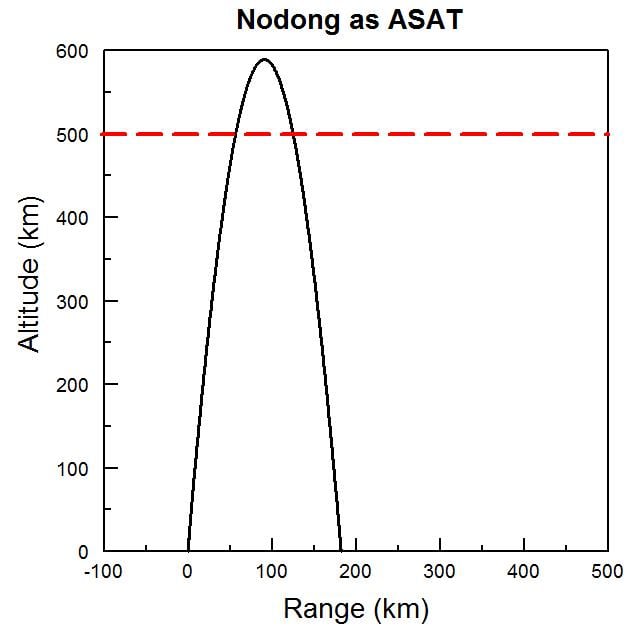 However, firing an anti-satellite (ASAT) weapon at an interceptor as it passes overhead just requires lifting the ASAT to the altitude of interceptor, and that can be done with a relatively cheap short-range or medium-range missile. Interceptors orbiting at 300 to 500 km would easily be within range of the Chinese DF-21D missile. Figure 2 shows that even a missile like a North Korean Nodong or Iranian Shahab 3 fired vertically could reach high enough altitudes to attack these interceptors if these countries developed or acquired ASAT capability to put on them.

Estimating the Number of Space-based Interceptors to Cover North Korea

This section shows why the physics of space-based boost-phase interceptors requires such a large constellation.

For a system optimized to defend against launches from North Korea, a space-based interceptor would be in an orbit like the white one in Figure 3, which is inclined at 45o to the equator and can carry the interceptor over North Korea. 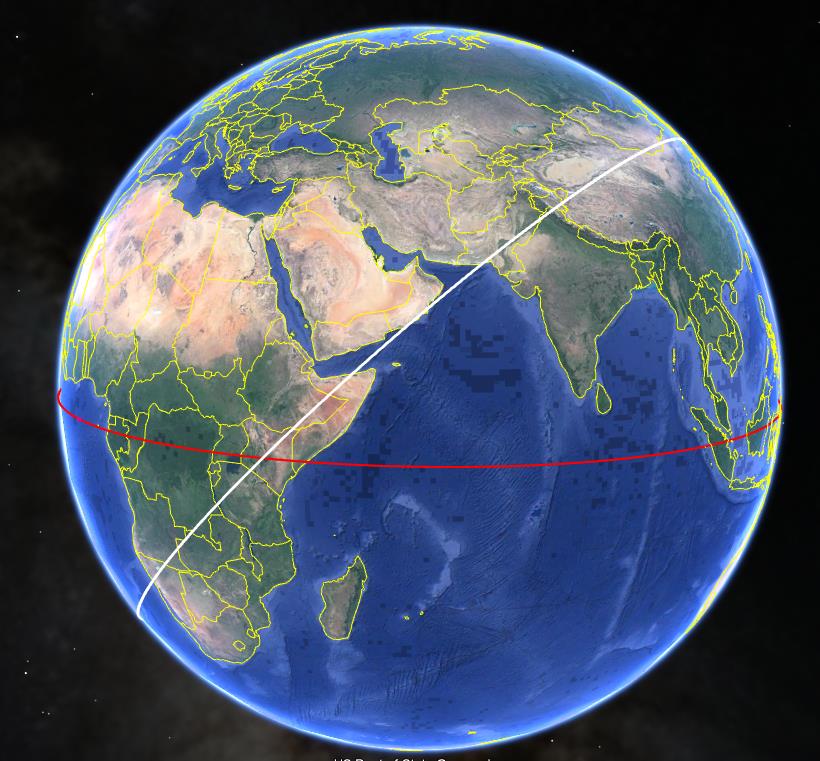 Fig. 3. The white circle is the ground track of an interceptor orbit that is inclined at 45o to the equator (red circle).

Figure 4 shows missile trajectories (yellow lines) from North Korea to the east and west coasts of the United States. The yellow circle shows the region in which a space-based interceptor traveling on the white orbit could intercept a missile below it. This circle is 1,600 km (1,000 miles) in diameter, which assumes a very capable interceptor in a low-altitude orbit against liquid-fueled missiles like North Korea has. Against solid-fueled missiles, which would typically have a shorter burn times, the circle would be smaller. Fig. 4. The white curve is the ground track of the interceptor’s orbit. The yellow circle is the region in which the interceptor could reach a missile launched below it. The circle is 1,600 km in diameter, which assumes δV = 4 km/s for the interceptor, in line with the assumptions in the APS and National Academies studies.

The interceptor moves rapidly in orbit, circling the Earth in about 90 minutes. That means the yellow circle will only be over North Korea for 3.5 minutes. To keep an interceptor over North Korea at all times there must be other interceptors in the orbit (black dashed circles) that move into place when the ones in front of them move out of place (Fig. 5). Fig. 5. As the interceptor moves in orbit, the yellow circle will not stay over North Korea and additional interceptors—indicated here by the black dashed circles—must be in position to take its place.

To have constant coverage over North Korea, there must be interceptors all around the orbit. In the case shown here, it takes 25 interceptors to fill up this orbit so that one of them is always over some part of North Korea. Since you would want overlap between the circles, you would need more than that—probably 40 to 50 interceptors in the orbit.

So far we have taken into account the motion of the interceptor in its orbit but not the fact that the Earth is rotating under this orbit. Three and a half hours after the situation shown in Figure 5 North Korea will have moved 4,000 km (2,500 miles) east. The interceptors on this orbit will no longer be able to reach missiles launched from North Korea: Figure 6 shows that the yellow circle no longer contains any part of the missile trajectories. That means the system would need seven or eight orbits spaced around the Earth, each with 40 to 50 interceptors, so that interceptors on these other orbits will be over North Korea as the Earth rotates. Fig. 6. Three and a half hours later than the situation shown in Figure 5, the Earth will have rotated under the orbit and the interceptor in the yellow circle will no longer be able to reach missiles launched from North Korea toward the United States.

Figure 7 shows eight equally spaced orbits (white lines) for a constellation optimized to cover North Korea, with a total of 300 to 400 interceptor satellites. That constellation, however, would only give constant coverage over latitudes near North Korea (red dot). Below about 35o latitude there would be big gaps in the coverage through which a country could fire a missile. And the constellation gives no coverage at all above about 55o latitude, which includes almost all of Russia (Fig. 8). 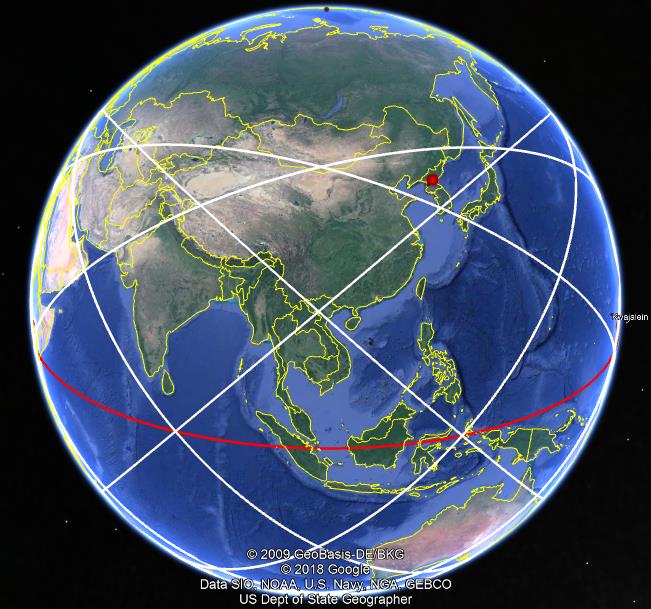 Fig. 8. This figure shows the ground coverage (gray areas) of interceptor satellites in a constellation using equally spaced orbital planes with 45° inclination, assuming the interceptors can defend an area 1,600 km in diameter. The two dark lines are the ground tracks of two of the interceptors in neighboring planes. As the gray areas show, this constellation can provide complete ground coverage for areas between about 30° and 50° latitude (both north and south), less coverage below 30°, and no coverage above about 55°.

Such a system would still only be able to engage a few missiles fired in a volley from the same place. It would give thin coverage at all latitudes between 70 degrees north and south, assuming a boost-phase interceptor that could defend an area shown by the yellow circle in Figure 2. Fig 9. This figure shows a constellation of 24 orbits with inclinations of 65o. With 40 to 50 interceptor satellites per orbit, this system would have a total of 960 to 1,200 satellites and could give thin coverage of the Earth between 70o north and south latitude. The yellow circle is the area one interceptor could cover, which we assume is 1,600 km in diameter, as in Figures 4-6.