In the midst of one of the most abnormal presidential transitions in history, Congress is spending its last few weeks of session to wrap up pending business. One of the final remaining priorities for House and Senate leaders is the 21st Century Cures Act (Cures Act). Among other things, the bill would significantly change the approval process for drugs and medical devices.

After some closed-door negotiations, text of the latest version of this sweeping bill was released over the Thanksgiving holiday weekend. The U.S. House of Representatives will rush to a quick vote on this bill as early as Wednesday, with limited public debate and discussion. The Senate will vote on the bill shortly thereafter. 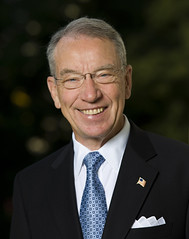 Senator Grassley was critical (again) in helping remove a loophole that would have meant less transparency for patients and consumers and less accountability for doctors, drug companies, and medical device manufacturers. (Flickr chuckgrassley)

During the negotiations, health care industry lobbyists attempted to water down a transparency law that lets consumers know who is paying their doctors. These disclosure requirements, included in the 2010 healthcare overhaul, have long been advocated for by UCS.

Championed by Senator Charles Grassley (R-IA) and then-Senator Herb Kohl (D-WI), the idea was for drug companies to disclose various forms of gifts and payments to physicians and publicly release that information. Consequently, patients today can make more informed medical decisions and understand potential conflicts of interest their doctors might have by accessing an online database that includes all this information.

The version of the 21st Century Cures Act released over the weekend created an enormous loophole by exempting certain types of gifts, including speaker fees at “educational events” as well as payments associated with “medical education.” This broad exemption, which was also pushed by the same lobbyists in 2010 but ultimately not included then either, would have greatly increased the drug and medical device industry’s influence on medicine and medical education.

Thankfully, Senator Grassley stepped in to prevent this critical law from being watered down, objecting to the inclusion of this loophole in any final bill. In a statement released on Monday, he said:

“The Sunshine Act brings transparency to a big part of the health care system for public benefit. Transparency brings accountability wherever it’s applied….We shouldn’t create a loophole that would let drug and medical device companies mask their payments to doctors under a payment category that’s too broad and could gut the spirit and the letter of the Sunshine Act.”

This afternoon, we learned that the provision will not be included in the final bill. Senator Grassley deserves a lot of credit for getting it removed.

Other concerns with the Cures Act

No doubt there are some good things included in the 996-page bill, like funding for the National Institutes of Health (though not mandatory), money for Alzheimer’s research, and helping finance Vice President Joe Biden’s cancer “moonshot.”

However, the Cures Act includes a number of provisions that threaten public health, mostly by drastically lowering safety and approval standards for drugs and medical devices at the Food and Drug Administration (FDA).

For example, under this bill, drug companies would no longer have to provide all of their data to the FDA when they want to bring new treatments to the market, limiting the amount of information agency scientists would review before giving their approval. This could put patients and consumers across the country at risk.

And we’ve seen what can happen when drugs and medical devices are approved without full consideration of the science or with undue interference from industry. In a 2012 report, we described how Merck devised a strategy to exaggerate the positive effects of Vioxx, while in reality, the drug led to thousands of deaths. This isn’t just a one-off. As my colleague has written in the past, the human cost of many FDA decisions can have deadly impacts.

Other members of Congress have also voiced concerns. In an impassioned speech Monday night, Senator Elizabeth Warren announced her opposition to this version of the Cures Act, specifically pointing to the transparency loophole, as well as laying out a number of other concerns.

If Congress is going to pass legislation that decreases transparency and benefits the drug and medical device industry without helping patients and consumers, that’s probably not the type of legislation that should be rushed out the door with little notice to the broader public. For the 21st Century Cures Act, the more you hear about it, the less there is to like about it.