Today, EPA released its annual reports on new passenger vehicles. One report (Trends) highlights the historical trend in fuel economy for cars and trucks over time, while the other report (Compliance) discusses the progress of manufacturers towards meeting global warming emissions regulations now under attack by industry and this administration.

Fuel economy of the fleet has once again improved, from 24.6 mpg in 2015 to 24.7 miles per gallon (mpg) in 2016. Thanks to strong standards, every type of vehicle (car, truck, SUV) has gotten more efficient; however, consumers are choosing to purchase more SUVs, which is acting to diminish the levels of improvement we need to see to reduce global warming emissions in line with our long-term climate goals.

Taken together, the key findings from both reports are clear:  1) every type of vehicle is getting more efficient, driven by strong standards, and that’s great news for consumers; 2) despite a meager overall improvement in fuel economy, manufacturers continue to comply with the standards; and 3) there’s still a huge opportunity for future fuel economy improvements, as manufacturers continue to bring newly redesigned vehicles to market.

All types of vehicles are getting more efficient 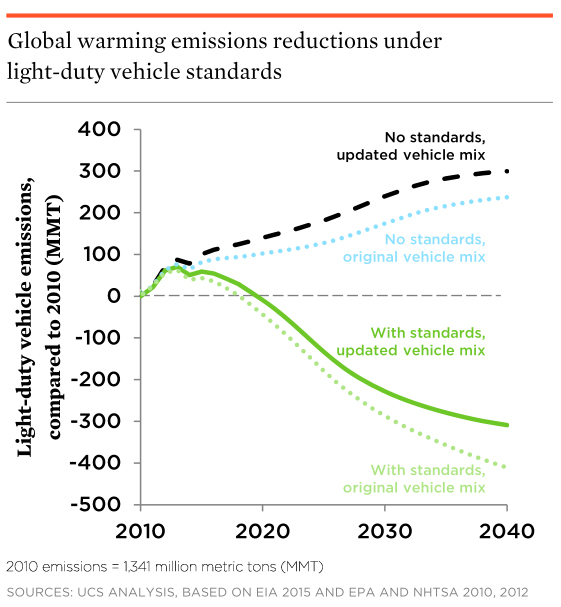 Increasing sales of SUVs are making it more difficult to achieve our climate goals, but strong standards pushing all vehicle classes to be more efficient continue to be key to reducing our climate impacts.

The Trends report shows clearly that the regulations are doing what they were intended to do—every single class of vehicle is getting more efficient, including the fast-growing SUV segment.  In fact, every class of vehicles except vans/minivans achieved record levels of fuel economy in 2016.  This is critical both to provide consumers with fuel-efficient choices no matter what type of vehicle in which they might be interested and to diminish the negative impacts on the climate resulting from a more truck-centric vehicle mix.

The class of car-based SUVs that are so popular right now (including the Honda CR-V and Nissan Rogue) actually showed the greatest year-over-year improvement.  This is not surprising—Ford CEO Jim Hackett acknowledged that fuel economy is one of the major reasons why crossover sales are doing so well.

Some automakers claim that selling more SUVs means consumers don’t care about fuel economy, but the numbers tell a different story.  Consumers continue to show that fuel economy is important, particularly when it comes to SUVs—the Consumer Federation of America showed that SUVs which saw a marked improvement in fuel economy (+10% mpg or better) outsold their competitors.

Automakers are complying with the standards

All large-volume manufacturers are entering the 2017 compliance year with a massive bank of credits to draw upon to aid with compliance during a lull in product turnover.

As I’ve reported in many years past, the industry as a whole has been ahead of the regulatory targets—this means that they have built up a bank of overcompliance credits, which many of them are now drawing upon.  Some in the media may seize on this and say that this means the automakers are not complying with the rules—however, that ignores the way the rules work or how vehicles are planned.

Manufacturers are measured on compliance over a 5-year period because that is the typical product cycle of a single vehicle.  Once every five years (give or take), a vehicle will undergo a “redesign” where major changes occur—this includes body shape and major crash safety structural elements as well as the size and efficiency of the engines, which set the performance characteristics and, importantly, fuel economy.  Once in the middle of a product cycle, a vehicle will receive a “refresh” where they may make cosmetic alterations, maybe make some minor changes to the powertrain (like a new transmission or maybe bringing over an additional engine that’s used in another vehicle built on the same platform), but largely the fuel economy and emissions of a vehicle are fairly constant over its five-year lifetime.

This means that manufacturers need to use a credit bank to compensate for the fact that a vehicle largely doesn’t improve much over the course of its lifetime—a vehicle will typically earn credits early on for overcompliance when the technology is new, and that overcompliance can then be used to compensate for any shortfalls that occur as the vehicle “ages” before its next major update.

From 2009 to 2014, manufacturers turned over new vehicles at an accelerated pace in the first few years of the regulation to introduce some new technologies, but that has declined now for 2015 through 2017.  This will correct itself for 2018 through 2020, when again these older vehicles are all redesigned.

Today, the fleet is older than usual, so while in a couple years there will be a large opportunity to add new technologies, the Compliance report shows manufacturers are dipping into their credit banks today as planned to compensate for the age of the vehicles.  And because of the early turnover in the first few years of the regulations, the industry was well-prepared by banking hundreds of millions of tons of credits, more than enough to help ensure compliance for years to come.

Manufacturers are investing in efficiency at different rates

Consumers are some of the biggest beneficiaries from these rules, having saved well over $50 BILLION since new standards went into effect thanks to rules designed to make every vehicle type more efficient over time.  And that will be even more important as these more efficient options make their way to the secondary market.  But not all manufacturers are investing equally in providing their consumers more efficient choices.

The Trends report shows that in terms of overall fuel efficiency, Mazda is at the head of the pack.  While some of this is related to its somewhat car-heavy fleet, it continues to focus on improving its conventional gas-powered engines, and deploying these engines broadly across all vehicles.  And they aren’t resting on their laurels, either, having announced the next generation of their engines, bringing diesel-like efficiency to a gas-powered engine.

Unfortunately, Toyota continues to fall behind the rest of the pack, seeing absolutely no improvement in fuel economy compared to last year, which fell short of the year prior—in 2013, Toyota had the 3rd most efficient fleet; for 2016, they have now dropped to 9th, ahead of only Mercedes and the Detroit Three.  While many associate Toyota with efficiency thanks to its Prius family of hybrids, this fall from grace is because Toyota has not made similar investments to improve its trucks and SUVs.  In fact, its Tundra pick-up and 4Runner SUV have been using the same engines since 2010 and 2009, respectively, with the 4Runner one of just three vehicles being sold today still using an outdated 5-speed automatic transmission!

The Compliance report makes clear that no major manufacturer is in danger of falling out of compliance (as I noted at the start), even if some of them are relying more heavily upon their credit bank.  But manufacturers like Hyundai and Honda are much better positioned than most not just because they have such a massive bank of credits, but because they have continued to deploy steady improvements across its entire fleet instead of banking on a single green “halo” vehicle like the Toyota Prius.

Manufacturers have a wide range of technologies available to reduce fuel use and emissions, but many “off the shelf” technologies have still not been widely deployed.

The technology assessments in the Trends report indicate clearly that while manufacturers are making progress introducing and improving technologies for conventional vehicles, they have on the whole been slow at deploying those technologies across the fleet.  This is why we continue to emphasize the ability for manufacturers to continue to comply with the regulations well into the future with continued advancement of conventional gasoline-powered vehicles.

Last month, we released a report documenting the auto industry’s well-established history of fighting automotive regulations. For better and worse, today’s Trends and Compliance reports encapsulate both where the industry could be headed and the historical pull towards resisting that change.

The indicators I’ve laid out above all show that the standards are achievable and important for both consumers and the climate. Every class of vehicles is getting more efficient, and many in the industry continue to invest in that progress, driven by these standards.  And, because SUVs and trucks represent a growing share of the market, these standards remain as important as ever to ensure continued fleetwide efficiency improvements—the fleet mix shift acts as a drag on achieving our climate goals, so weakening the standards could set us backwards, as occurred in the 1990s.

At the same time, manufacturers are trying to seize upon misinformation about how the standards work and their ability to comply to weaken the rules.  It’s critical that they stop this nonsense so we can continue the progress already set forth.

The Trends and Compliance reports released today indicate that automakers are well on a path to comply with regulations that will nearly double the efficiency of the passenger vehicle fleet by 2025—so instead of fighting it, let’s focus on achieving it and then figuring out what lies beyond so we can continue to meet our climate goals.